Many of you might work for a company/university that has access to IDA pro or maybe you just downloaded their free version IDA homepage and need some help getting started.

First you should get all the tools you can get to make your life easier.

All this can be found here:

Plugin tested on the eboot.bin file from the F.E.A.R.2: found and successfully created 137 jump tables.

Source code and precompiled plugins: http://www.ps3hax.net/attachment.php?attachmentid=3039&d=1376890580 found on hax in forum, you may wish to relocate

Many of the tools are opensource, the idc script do not have to be compiled but the plugins must be.

The code itself should compile correctly, but there are many options that are specific for you PC ... In Visual Studio, you have to correctly set the paths to where you have the sdk installed and so on.

You will see there are options for 32/64 bits.. debug and release..

For that you can google, the instructions.. compile a "hello world" for ida, and then try to compile this.

If you want the latest version of the jump table plugin you can use this precompiled http://www.multiupload.com/07RP8RSDF3

Continuing your or someone else's work in another database[edit]

You might stump with someone's IDA database and you would like to continue his work. Or you found that there is a new great plugin/script that makes everything easier but you don´t want to loose your work.

I will take this as an example, the elf that runs in procs 6 (the one that has to do with QA flag, dongleaut, etc)

You might find some "coolstuff" but IDA doesnt find the xrefs and it is partially analyzed.

Isolate what you want to copy[edit]

1. Step identify what you want to extract from that database, in this case:

This file contains all what he has done to his database. We only want his function renames and comments so in linux we do

Copy this lines to another file. as an example COMMANDS.TXT

Extract the same elf from lv1.self (the elf we are using as an example is embedded in lv1 (look for matches and extrat that elf with a hex editor)

1. Load the elf you want (the one that runs in proces 6) // With the auto-analysis option disabled

I built a script that makes a good analyze of it and most of the embedded elfs.

1. Paste the commands you copied in COMMANDS.TXT in the IDC window (or create an IDC script out of it) 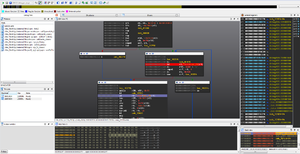 Whoever used to debug on Playstation 3 knows that there is only one debugger available - SN Systems ProDG. It has some nice features (that I even miss in others debuggers) but overall... its not that good. There also was a gdb client but it was pulled around 1.xx sdk (specification changed, there is no more step cmd, etc). So after some time that I spent with ProDG I realized that it just dont works for me and decided to get host debugger to communicate with Ida. It would have allowed me to use all those nice features like scripts, plugins, tracing, leaving comments in place, interface and hotkeys to which I am used to over the years.


Okay, I hear that someone of you is asking why I did Ida module and not some kind of gdb proxy instead, and reasons are simple:

So I did it and it works pretty well. Was testing it for months, catching bugs. At the last time fixed some remaining bugs around half year ago, so it should be much better, but not used it much since then.

It uses ProDG's TMAPI for communication over deci3 protocol with ps3. Its pretty good and even if deci3 specification docs are leaked its saved alot of time. Therefor, its supports only Windows platform.

Copy deci3dbg.plw and deci3dbg.p64 to plugins folder inside your Ida Pro installation.