Difference between revisions of "Thermal" 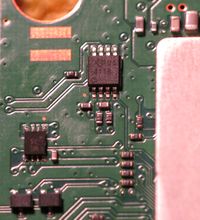 Fan settings per PS3 model based on syscon data reads[edit]

Homebrew for thermal and fan read and control[edit]